The Kardashian-Jenner dynasty have their immaculately manicured fingers in a lot of pies: fashion, haircare, cookbooks, make up, Olympic gold medals, diet pills, sex tapes, etc, etc but there was one vital area they had overlooked. Thank goodness for Richard Branson in the making Robert Kardashian Jnr and his Arthur George line of footwear. It’s not even slight hyperbole for me to admit that browsing the Arthur George website is one of my favourite uses of time, and I’m going to talk you through some of my favourites from the range. 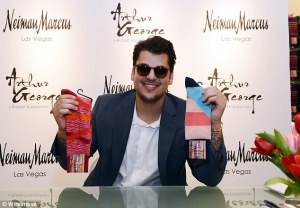 Family matriarch Kris Jenner uploaded these beauties to her Instagram account earlier this week with the accompanying (alleged) quote from Coco Chanel “A girl should be two things: classy and fabulous”. If I were to visualise a classy, fabulous girl they would most certainly be wearing these on their feet and Coco definitely isn’t turning in her grave. 10/10

For my flatmate’s birthday I decided to splash out on pair of Arthur George socks for the lucky girl. Deciding which option to go for was the modern day gal’s equivalent of Sophie’s Choice but in the end I plumped for these beauties. Of all the things in the world a young professional woman would want written on the soles of their feet “smoke weed” is at the bottom of this list, so these won mainly for their surreal shock value. They had their intended result and she GASPED when opening the package. Gold star to me! 9/10 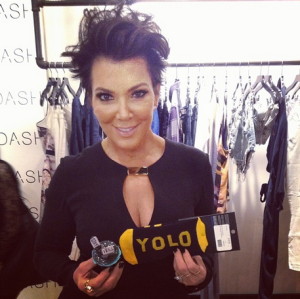 If my favourite Momager wasn’t personally holding these YOLO socks (whilst sporting a Kardashian Kollection frock) they wouldn’t feature so highly on my list. Such a goddess. And with her hair styled in that fashion she is the living embodiment of YOLO so who better to model them? Get that 10% gurlfriend! 8/10 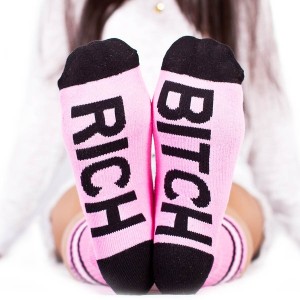 For me these socks evoke the golden era of elder sister Kim Kardashian-West; the halcyon days before she’d found fame in her own right and was still employed by former school friend Paris Hilton as a stylist. Looking back at pictures from that era it’s evident that she’d have swallowed bleach if it would have resulted in her replacing frenemy Nicole Richie in The Simple Life. That era really was the embodiment of the Rich Bitch era, a simpler time for us all. Please note Kim’s feet are not visible in the below picture so feel free to join me in imagining she is wearing these beauties to keep her ankles warm…. 7/10 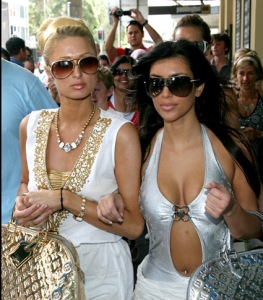 The reasons behind Rob’s break up with Rita Ora were much publicised at the time, mainly as a result of his Twitter rampage in which he accused her of cheating on him with over 20 men amongst other things. BUT. Perhaps the real reason was that he tried to coerce her into wearing these monstrosities? 1/10

If you’d like to purchase a pair for yourself they are available directly from http://www.agsocks.com/&nbsp;