Kylie’s debut album was the second album that I owned, Bananarama was my first (soz Minogue), but KYLIE was the first album I went into a shop and selected for myself. I can remember it clearly, selecting the cassette from my hometown branch of Boots, paying with my birthday money and taking it home to my Fisher Price portable tape deck on which it was played on constant loop.

Kids in the world of streaming will never understand how it felt to get two new albums a year MAX and how those albums would become fully ingrained into your soul through constant listening. Before too long I had a Sony Walkman as well as my home player so my limited music library took even more of a battering. The album would be on rotation at school discos and soundtracked every single birthday party I attended during that era. I’d blast it on car journeys (as my Gramps would say “Kylie Min-O-log again?” just to wind me up) and it accompanied me to sleepovers, Brownie camp and tea parties at my best friend’s house. 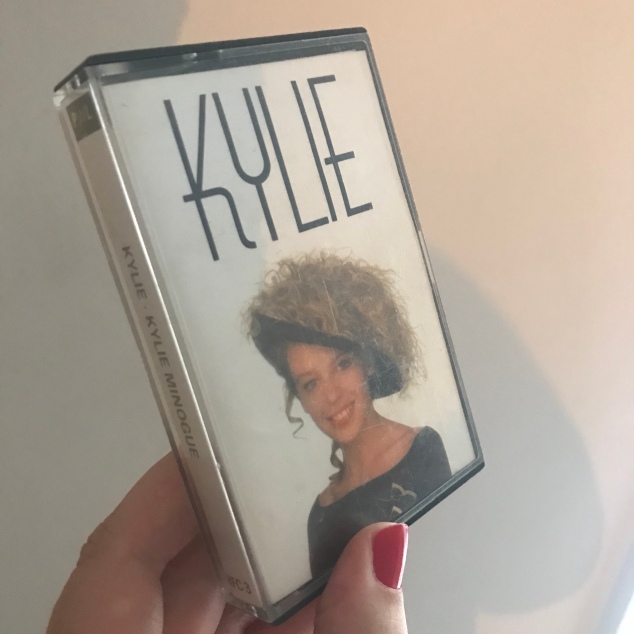 These were the days long before YouTube and to satisfy my Kylie desires I’d pore through the TV guide to see if my queen was due on Top of the Pops, Going Live or Wogan that week, then sit next to the telly with my finger hovering over the record button ready to add new entries to my home made Kylie compilation video. These would then be constantly watched on loop to try and learn dance routines and to check out the latest fashions.

Kylie’s star turn as Charlene Mitchell-Robinson in Neighbours ensured there was a daily after school fix for my obsession; her TV wedding had more viewers in the UK than Harry & Meghan’s recent nuptials which is simply mindblowing. I’d cut out every image from my Mum’s newspaper, Fast Forward & my elder sister’s Smash Hits magazines and proudly glue into my Kylie scrapbook. It never once crossed my mind that one day I might be lucky enough to see my idol in concert, let alone to meet her 3 times. My tiny mind would have been blown to one day know that my queen would view, let alone LIKE this photograph I proudly had taken around this time in Madame Tussauds on a family day trip.

30 years later and this album still fills me with utter joy – Je Ne Sais Pas Pourquoi Kylie, but I’ve Got To Be Certain that it was Love At First Sight & I Should Be So Lucky to Still Be Loving You.