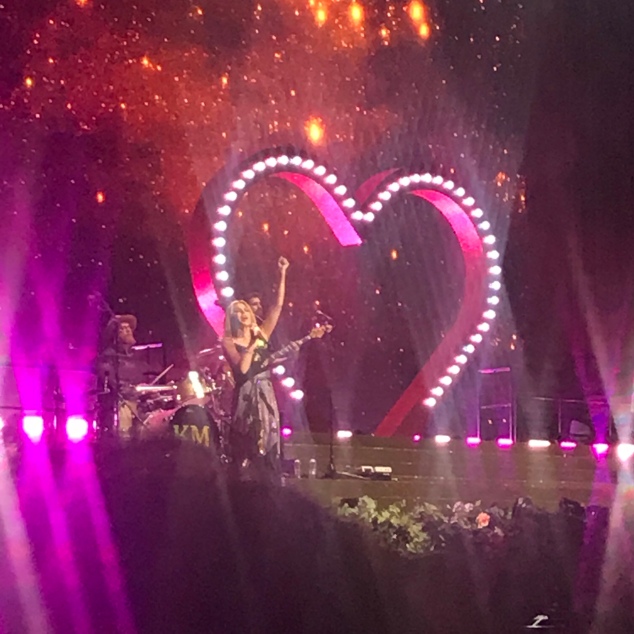 Some people get their highs from drugs or alcohol, but I get my highs from Kylie Ann Minogue. And just like the 70,000 spectators at the BBC Radio 2 Festival In A Day (not counting the millions tuned into the radio and television broadcasts) my comedown is BAD today. The benchmark was set sky high by Kylie’s last headline slot at Hyde Park in 2015, affectionately known as ‘the Woodstock of our generation’ but it was easily equaled in a gloriously joyous hit laden set.

The highlight was without a shadow of a doubt her former love Jason Donovan joining her on stage for their million selling hit Especially For You, as evidenced by the above video of my scream which could be heard as far away as Kylie’s native Melbourne. When the opening bars drifted across the festival and Min invited a choir to duet with her rather than the Scott to her Charlene my heart sank. This wasn’t to be the promised surprise after all. BUT never underestimate a Minogue as just before the famous dance interlude she announced “But I need a dance partner”…and suddenly our Jase appeared from the side of the stage. They launched straight into their iconic side to side dance complete with SPIN that featured in as many school discos in the late 80s as units it shifted. The story became even more special when it transpired afterwards that Jason had only got a call at 7pm and without any hesitation he hopped straight on his bike and CYCLED to the festival. Just get back together guys – PLEASE!

The other big surprise of the evening was Kylie’s former PWL (and now BMG) label mate Rick Astley joining her for surprise medley of I Should Be So Lucky and Never Gonna Give You Up.  This Stock, Aitken and Waterman reunion seemed apt considering the location where the original Hit Factory Live reunion gig was cancelled six Summers ago. Or as I like to refer to it the worst day of all time.

The chemistry between them was electric, you could feel the pure delight radiating from both of them, as Rick exclaimed when leaving the stage “You have made my year”. Alas they did not go out on a complete high as Rick also joined her for a duet of Kids. I never like to speak ill of Minogues so instead I’ll leave it on this point – at least it was Rick who joined her as her surprise guest rather than the bloated ego of Robbie Williams.

Other highlights included an impromptu acoustic medley of some of her old hits when there were technical issues, personally I do not think it’s a surprise that I bellowed ‘JE NE SAIS PAS POURQUOI KYLIE” then she included it. There were no rarities and the majority of the setlist consisted of songs I’ve seen multiple times before but this was to be expected and the absolutely the correct thing to do considering it was a festival set. When the show ended in an immense explosion of confetti during All The Lovers my appetite was more than whet for the upcoming Golden Tour. Kylie as a performer just gets better and better and it was a true delight to see her win over such a large crowd.